Well, Today would be a good day for it, last friday in the month. (28th June)

Misfuelling is surprisingly easy to do, some people do it in a car they have owned for 10 years at a petrol station they have been using weekly for 20 years others do it when they are under stress, driving unfamiliar cars in unfamiliar locations, workmen at 5.30 am, or cross channel couriers on the M20 at 4am, taxi drivers who have been filling up at gatwick and heathrow after long trips, people coming back from holiday and taking cars out of long term parking, all sorts of folks, but more often than not its ordinary people on ordinary errands making a very simple mistake.

If it makes you feel any better the maritime and aviation equivalent of misfuelling makes your problems seem trivial, back before ports had standardised fittings for refuelling boats with diesel and fresh drinking water it could occur that diesel was pumped into the fresh drinking water system on the boat, if this was left long enough for someone to catch a mouthful of diesel it would necessitate the complete removal and replacement of all drinking water plumbing from head to toe, a very costly business indeed which could  be the end of life for the boat

It is a common held myth that jet fuel has some sort of super powers and is highly volatile, in fact jet fuel is stable, and is closely related to diesel, and in some cases is used as diesel (illegal). the opportunity for mix up at an airport is to put piston engine fuel (petrol) into a jet aircraft, or jet fuel into a piston aircraft, either which way can, (and has) ended very badly if the plane ever makes it off the runway.

Contaminated fuel in aircraft isn’t likely to end well either, take British Airway flight 38  which was the first  Boeing 777-200ER ever to be written off as a total hull loss, a few hundred mill of wrecked plane all because some some water in the tanks turned to ice blocking the fuel supply  in a most inconvenient manner – just as the pilot was powering up at the end of a glide towards the runway for the final approach.

Whether the cause was contaminated fuel, or condensation from high altitude flying over the Arctic with dozens of cubic metres of empty fuel tank condensing air into water  the result was an ugly crash, in which luckily no one croaked.

And your worried about a few litres of petrol in your diesel car? 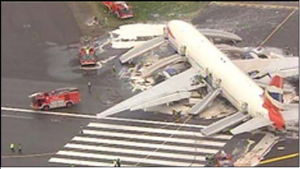