Honda's are an easy diesel to misfuel, the engines are quiet, nippy and easy to mistake for petrol.

Our most common call out on Diesel Honda's is the the Civic followed by the CRV then the accord.

Oddly enough there is a special tool made just for taking the fuel out of a honda civic, well its not that special and tool might not be the right word, but the suction line we use which is a braided hose with a metal tip is 2 metres long, that is to say we insert 2 metres of it into the car, this gets out fuel from pretty much everything, except! the honda civic which needs a 3 metre hose, reason being is the peculiar position of the fuel tank which is located far from the filler cap. 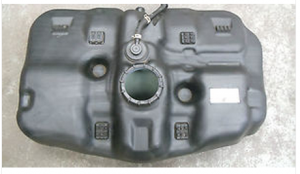 Not that we ever remove a tank to drain it, here is a picture of a 2008 honda civic diesel tank that has been removed from a vehicle that was written off.

A honda civic is not a car I would suggest trying to drain out yourself, but for the budding mechanics who will have a go anyway here's how I would do it if I didnt have a 3m suction hose.

1) disconnect the fuel line at the high pressure pump, this would be the feed line from the tank to the pump

2)  Securely, read that twice, securely connect a makeshift hose onto the fuel line and into a suitable container big enough, (you will know if you have not done this properly when your engine catches fire from all the fuel leaked onto hot parts)

3) go to the fuel sender relay which is usually located behind the glove box, a quick google will confirm this for your model of honda

4) bypass the fuel relay switch, that is to say bypass the relay switch by removing it and directly powering the in tank fuel pump to turn it on thus pumpiing the fuel forward into your makeshift hose connection and  the container you are using

Bypassing the fuel relay switch can be done with a paperclip by mcgiver types, or a power probe by budding auto sparks, or you can even buy an on/off relay testing switch, however it is done the name of the game is to get power into the on board fuel pump so it powers up and sends all the fuel up towards the engine.

Theres allot that can be done wrong here, spilling fuel is just the beginning, bypassing relays can blow fuses and also done very badly wreck the the ecu, so do not try it unless you are confident in your mechanical skills.

Of course, once done you should prime up with fresh diesel to the connection you have made, thus bringing fresh fuel thru the system and up to the high pressure pump, if the car doesnt want to start, a quick burst of easy start will do the trick

For those looking for a simpler alternative to draining out a Honda, just call a fuel draining technician, cost between £150 and £250 and the jobs a good un.