If you accidentally filled your diesel car with petrol, or the other way around, you do not have to worry! While it can definitely cause a lot of headaches, with our help it doesn’t have to. We are a team of fuel draining experts operating a mobile unit in Portsmouth. We pride ourselves with a 99% success rate in our previous interventions and we will be with you in less than 30 minutes, in most cases. As our team carries all the necessary equipment, there will be no costly repairs involved and you will be on your way in less than an hour.

Some of the previous jobs performed in the Portsmouth area include:

Fuel draining in Copnor: Refilling his Hyundai i10 at the Esso Petrol Station on Copnor Road, a young driver didn’t pay attention and ended up with the wrong fuel in the car. Broken down on Norway Road, he called us and we arrived there shortly and managed to get him running in less than an hour.

Fuel draining in Fratton: Driving home from work, a young person stopped to fill up his Renault Clio at the Esso Petrol Station on Kingston Road. Unaware that he filled it up with the wrong fuel, the car stopped working on Mayfield Road, from where we were called. The team arrived in less than 30 minutes and got the car running shortly after.

Fuel draining in Farlington: A businessman driving a BMW 520d stopped for a refill at the Sainsbury’s Petrol Station on Fitzherbert Road, but accidentaly used the wrong fuel. We were called from Northern Parade and we arrived there quickly to fix the problem in less than an hour.

Fuel draining n Chicester: A driver needed to fill up his car with diesel so he stopped at the Sainsbury’s Petrol Station on Westhampnett Road. Unaware that he pumped up petrol in his Ford Focus, the car stopped working on Clay Lane. We were called from there and the mobile team arrived in less than 30 minutes and fixed the car in less than an hour.

Fuel draining in Littlehampton: Stopping at the BP Petrol Station on Worthing Road to fill up her Vauxhall Astra, a young woman accidentally used the wrong fuel and her car just stopped on Bridge Road. Our mobile team was able to assist her in less than 30 minutes and to get the car back on the road in under an hour.

Fuel draining in Wycombe: A mother of two was returning from football practice when she stopped to fill her car the the Shell Petrol Station on Fareham Road. Unfortunately, her VW Golf was filled with the wrong fuel and that’s why it broke down on the A32 later. Fortunately, our team managed to help her get the car back on the road in less than 30 minutes. 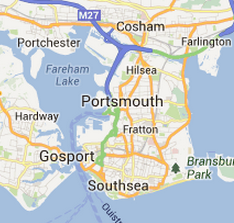 Misfuelling problem? Call us at 07720 875212 and tell us your location in Portsmouth. It doesn’t matter what time it is or what type of car you have misfuelled because our technicians have the right skills and equipment to remove the wrong fuel out of any vehicle.

At Fuel Expert, we will always do our best to come to your aid in 30 minutes or less. We have several teams in their mobile vans ready for dispatch. We’ve been doing this for three years now and we’ve saved thousands of dollars on car repairs for our more than 5,000 customers. This is why we’re one of the most called-for garages that remove wrong fuel.

For those who needed fuel drain in Portsmouth, we’ve helped them in the following ways:

Fuel drain Cosham PO6. We just finished draining the wrong fuel in Hilsea when we were called to Ashurst Road. The contaminated fuel removal was done in 40 minutes. That’s how easy it was for us to make customers happy.

Fuel drain Southsea PO5. Since we were the nearest team to the Green Road Service Station, we were dispatched to drain the contaminated fuel from a misfuelled BMW. The customer was so thankful that she promised to refer her friends to us, which she did.

Fuel drain Bedhampton PO9. We were dispatched to the Premier Inn Portsmouth where a guest misfuelled his Mercedes-Benz C-Class. In 45 minutes, the owner’s agony was over because we drained all 28L of petrol.

Fuel drain Kettering Terrace PO2. We truly felt victorious at the Shell Victory when we drained two misfuelled cars, a Ford and a Toyota, back to back. We finished in 40 minutes while the other team finished theirs in 50.

Fuel drain Widley PO7. Our crew drove over to Portsdown Service Ltd. in 15 minutes, where an elderly customer was eagerly waiting for our verdict on her misfuelled Toyota Verso T. She breathed a huge sigh of relief when she heard us start the engine after an hour of fuel draining work.

Fuel drain Fratton PO1. It was Saturday, 11pm, when clubbers called for help from The Battle of Minden. A BMW X3 had 15L of petrol in it left after it was driven for a few miles. The owner gave each one of us a warm hug for successfully removing the contaminated fuel and filling it with fresh fuel.

Fuel drain Copnor PO3. The Copnor Esso Express crew referred a customer to us when he filled his Fiat Qubo with 33L of petrol before he noticed what he was doing. Good thing we were nearby when he called. We got the car running smoothly again in 30 minutes.

Fuel drain Drayton PO6. It was a cold 3am call when we drove to Lexmanor Ltd. but it didn’t stop us from fixing a misfuelled Alfa Romeo MiTo despite it being filled with 40L of petrol.

Fuel drain Hilsea PO3. A guest at the Hilsea Lodge was frustrated with her Mini Cooper because it won’t start only to see how she filled it with petrol upon checking her receipt. But we removed it all in 50 minutes.

Fuel drain Port Solent PO6. We saw the customer’s BMW 635d Sport Coupe at the Marina Keep roadside where it stopped running due to misfuelling, but we fixed it in an hour.