Theoretically we should be seing less landrovers/range rovers with the wrong fuel since the introduction of the miss fuel protection device.

The clue is in the name, it is a misfuelling protection device, not a prevention device - (I would guess the company lawyers weighed in on that one)

That said, I would be very interested to know how much if at all this has affected the amount of misfuels since it's introduction.

The idea is quite clever, when the smaller petrol nozzle is inserted into the diesel landrover filler neck - it pushes past the point that a diesel nozzle would, and activates a spring that closes the throat of the filler neck thereby stopping the flow of fuel.

In the real world it doesn't always work like that, for a start the system works only if you put the nozzle in dead straight and all the way, dozens if not hundreds of my customer have managed to get quite a bit of fuel into these cars before the device kicked in, if at all, and I have been asked on a number of occasions to provide statements for customer who were considering taking legal action regarding the device. 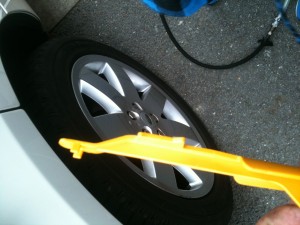 Once you have activated the spring loaded throat closer, you will have to root around your 4x4 to  find this, it is the tool that resets the spring in the filler neck - which you need to do before you can put more fuel in.

It is normally next to the spare tyre in the boot. 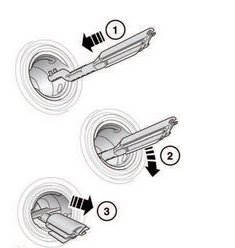 The trouble with landrovers is how much fuel they can take! my on board contaminated fuel tank has a 330 litre capacity and I can usually get 7 to 10 fuel drains done before I need to empty out, when I get a full landrover discovery I often need to go straight back to the yard to unload, which can be a pain if I have someone else waiting for me who is stranded at a petrol station or the side of the road.

Some of the new landrovers, especially the rangerover need a special touch to drain them out, the usual method of putting a specialist syphon hose down the neck and pumping it - will only clear half the tank, so to drain it out fully I need to bypass the fuel system control unit to drain both tanks 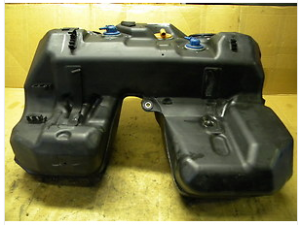 This is a one pice tank, in other words it has 1 sender unit and a hose inserted into the filler neck can drain the whole tank, this is from a mid 90's P38 rangerover

This is from a new Rangerover, it is much bigger and the saddlebag design allows it to hang over the prop shaft, efficiently using deadspace under the car, improving fuel capacity without affecting ground clearance.. BUT inserting a vacuum line into the filler neck will not remove the fuel from the far side of the tank, which leaves contaminated fuel in the system.

To deal with this we first pump out all the fuel from the filler neck side,  and then bypass the brains of the fuel system to transfer the remaining fuel from the far side to the nearside, (there is some clever electrics that manage this automatically), once we have done that we simply suck out the remainder from the near side.

This is a BIG tank, the top of it sits right under the back seat (you can see the shape)

We are able to perform a fuel drain on any of the Land Rover’s which are listed below: